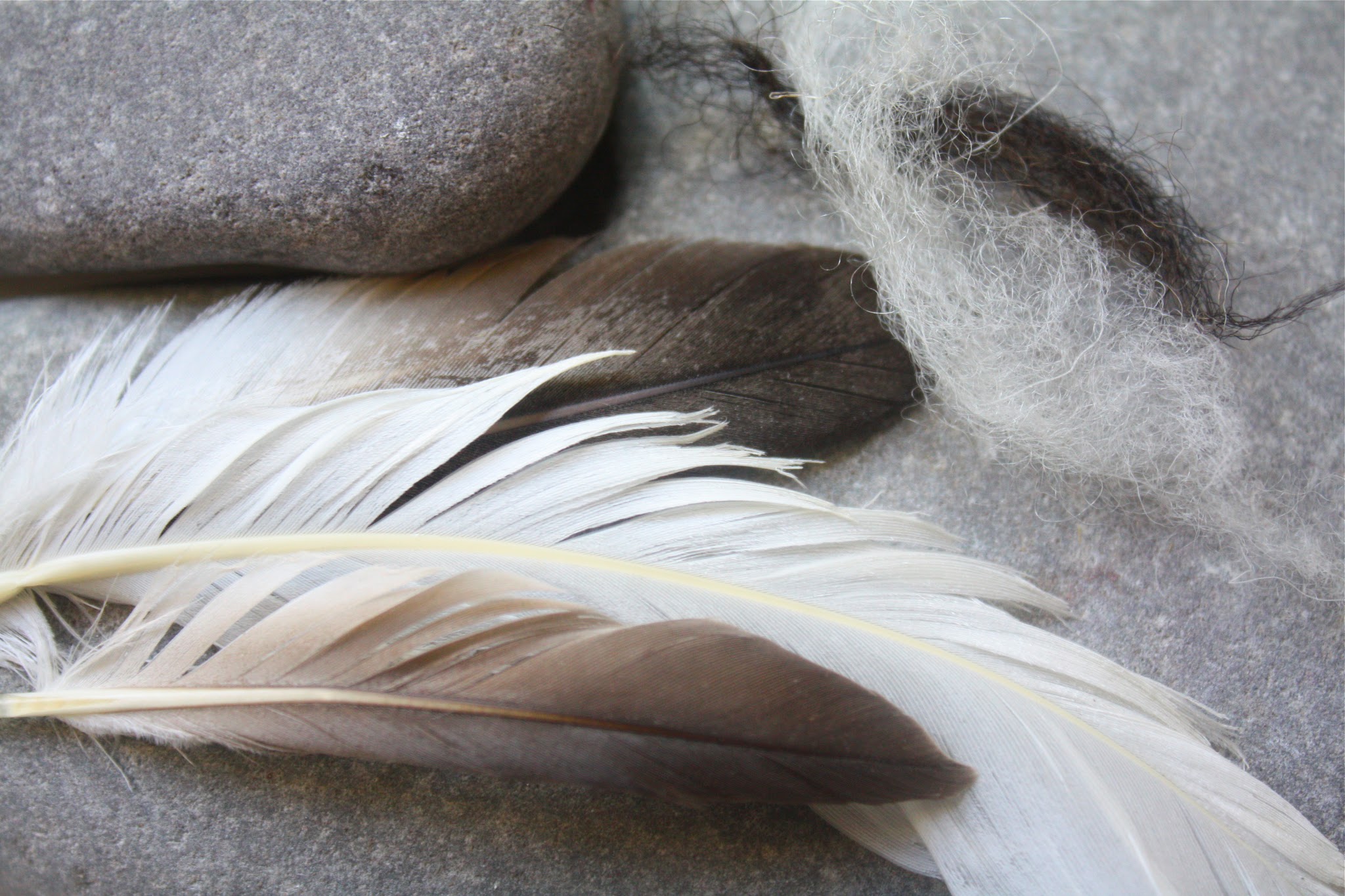 What does a horse, a seagull and a sheep have in common?

Well today at least, they have all unwittingly donated fly tying materials to my cause. Yesterday I arrived in Cornwall. I'm planning to fish for native trout in the fast bright streams that tumble down from the moor and into the Atlantic.

I thought it would be an interesting challenge to leave my fly boxes at home, arriving only with some basic tying tools, a few hooks and some grey thread. I will scavenge some fly materials directly from the local landscape and see if I can tie up some passable kebari and catch wild trout with them.

I have been thinking about folk fly patterns that have evolved from materials locally to hand and about the resourcefulness of fly-tying artisans living remote in time or space from any Orvis shop. How much more their fly patterns must resonate with the landscape for being a product of it. I hope that I can find a stronger connection too by getting out and scavenging my materials from the land. 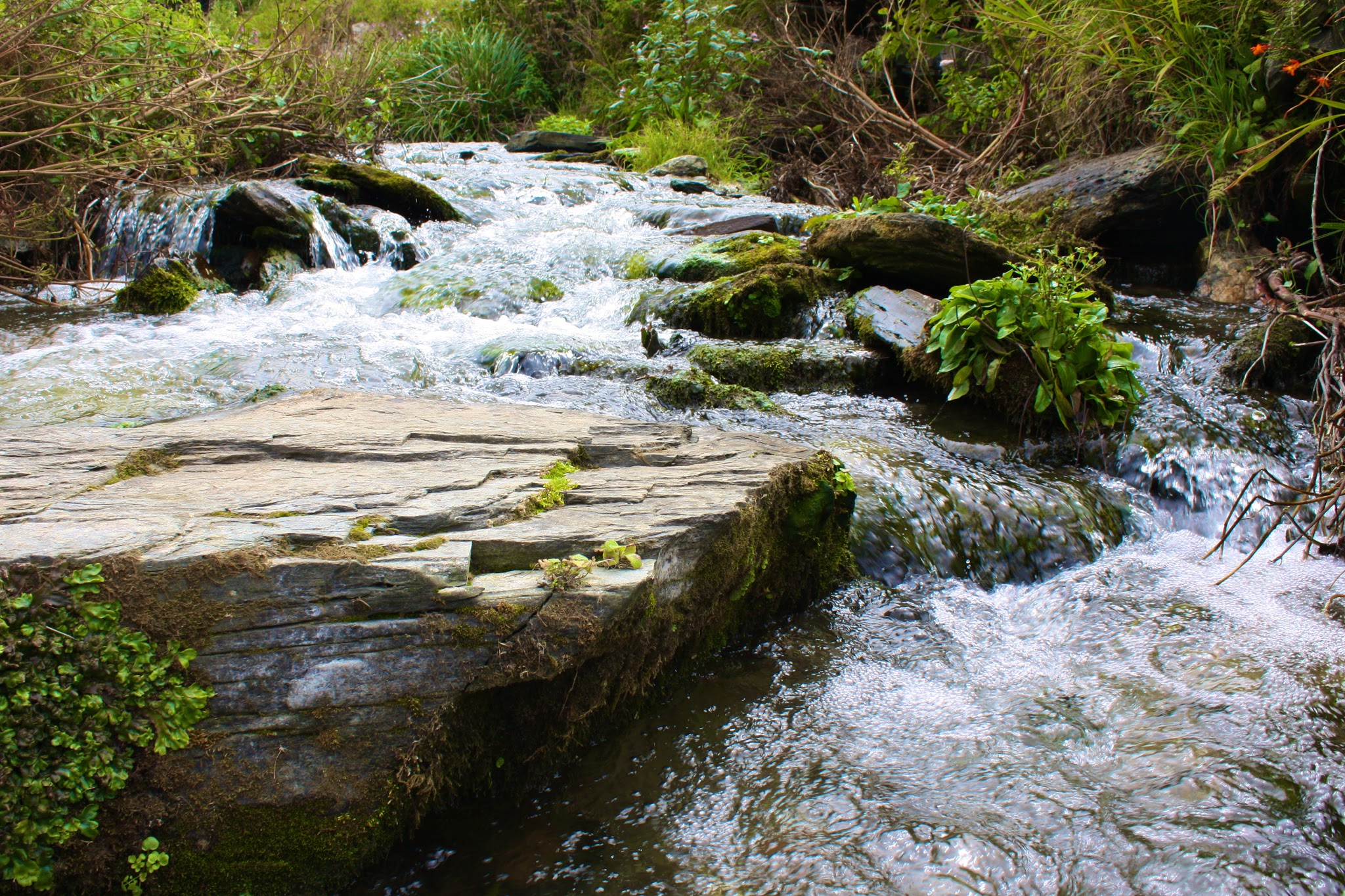 So this morning I am up and out early on Davidstow Moor and walking  amongst the sheep to look for some wool for my dubbing. Davidstow Moor Airfield was used by the RAF to launch bombing raids in WWII. The runways and some of the old buildings are still here, including the control tower. As I cast around the ruins looking for my wool I reflect on how Tenkara can take us to new destinations with new stories.  This place certainly has its fair share - ghost stories that tell of phantom service men and women and even of a stricken bomber that replays its crash landing on dark lonely nights. 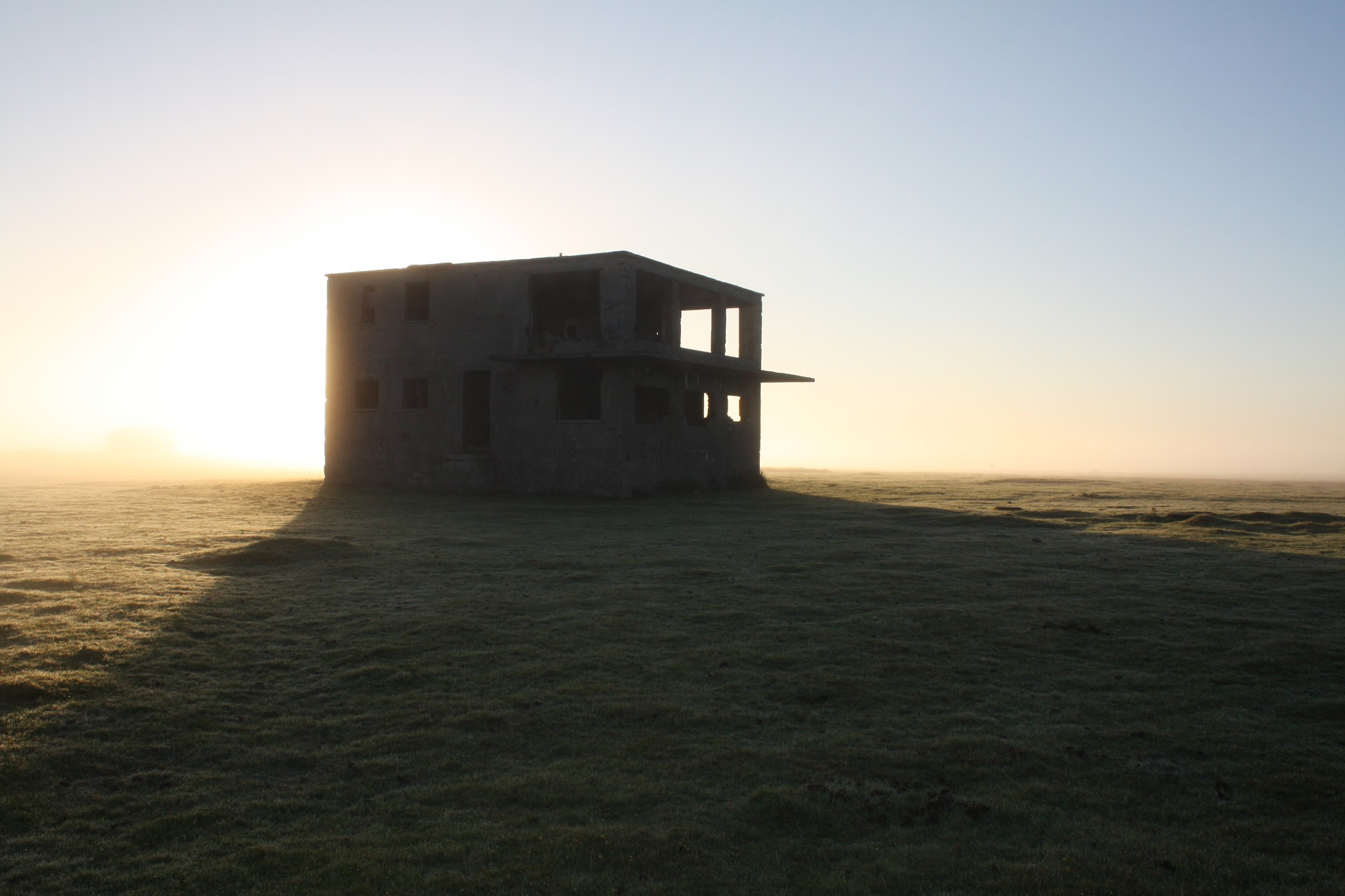 This is not a place to dwell too long and I am glad when I eventually find some fleece.  Little scraps are blowing around and some is caught here and there and I collect a little in my bag. It's creamy coloured and oily and will make a nice dubbing rope for my kebari bodies. I would like some dark wool too for contrast but there are no black sheep here.


Later and I am walking on the Atlantic cliffs. There are some dark colored horses here and I can see some little tufts of horsehair clinging to some barbed fence wire. Perfect! Although I've never tied with horsehair before.. it's quite coarse and dry compared to wool but I think it will give a nice 'buggy' texture to my kebari bodies. 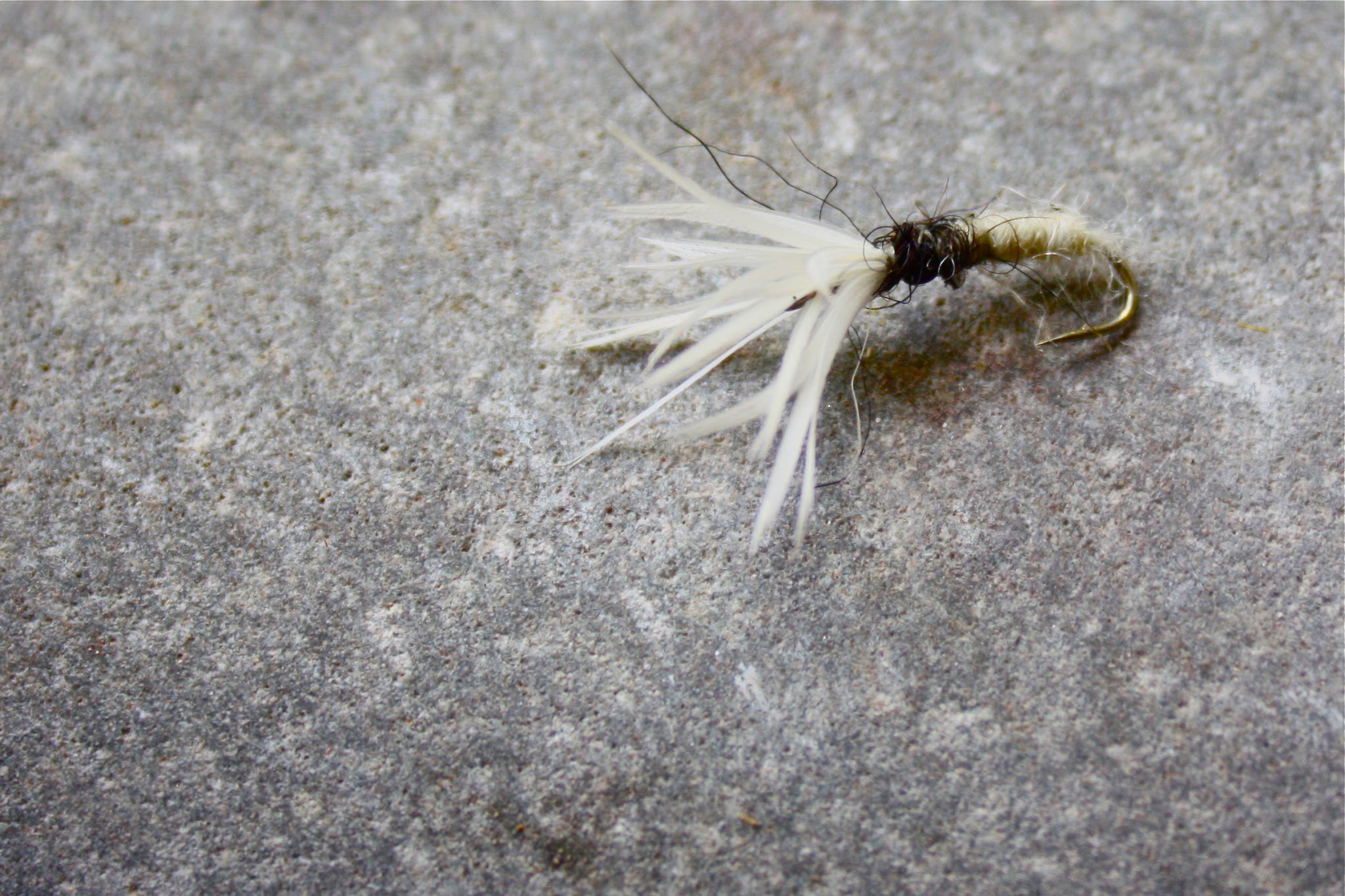 More challenging is the need for some feather for hackles. Descending from the cliffs and down into a rocky cove, sea birds wheel overhead. Herring gulls mostly, and before long I find some stray sea-wet feathers stuck on the rocks. They grade in color from chestnut through greys, cream and white. They are very oily and the filaments are too long and stiff to wind hackles from.

But with a bit of trial and error I find I can remove the filaments separately from the central flue and stack them around the hook shank and tie in. Not a bad stiff-hackle kebari, and using the downy lower feather, I can also make a soft-hackle version sheep and herring gull kebari.
They aren't going to win any fly tying competitions but I'm really quite pleased with the results of my early attempts. I have learned a lot from working with unfamiliar materials. 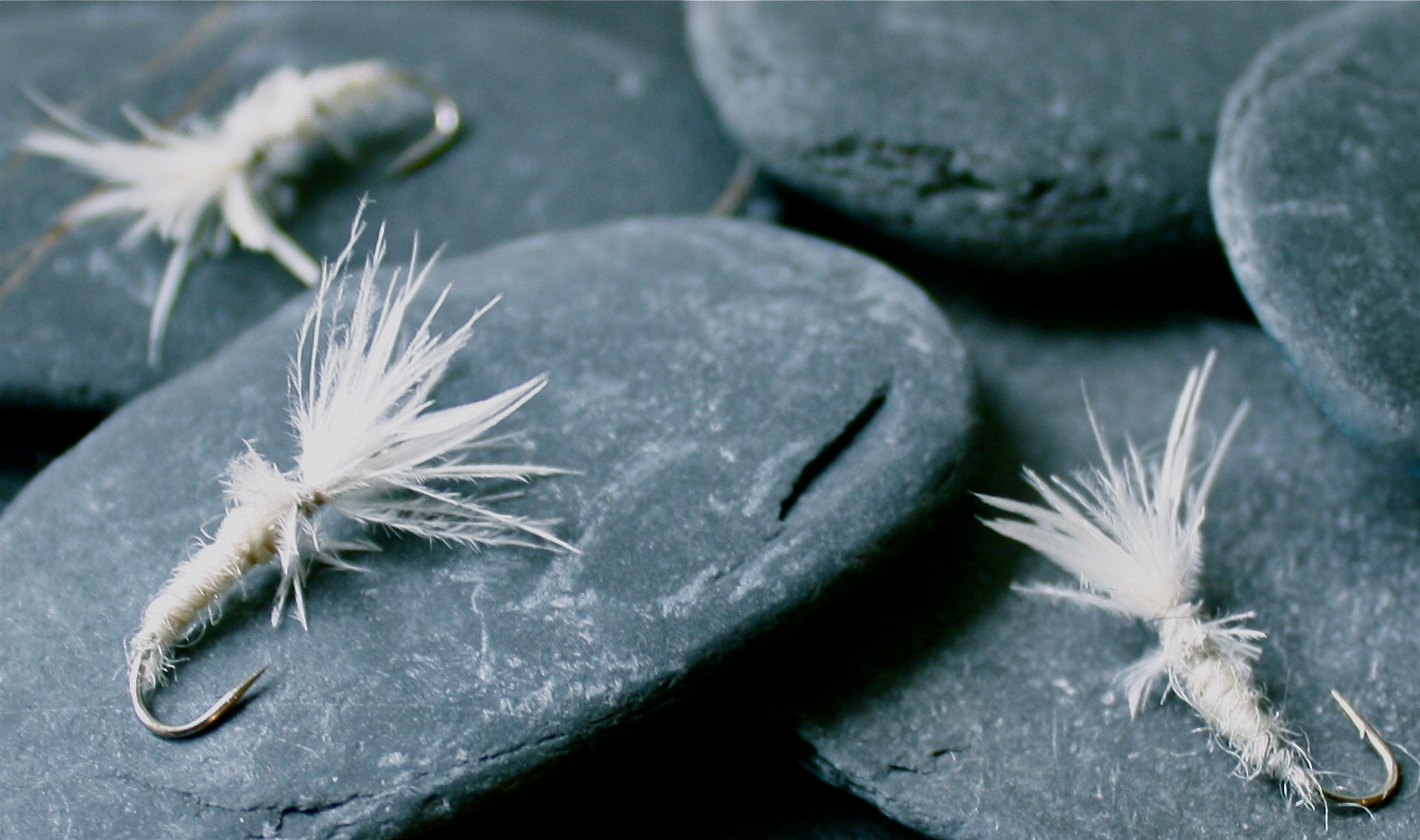 Keen to put them to test, I arrive at the little moorland stream with high anticipation but a little anxiety too. It was bold to drive 300 miles without my usual fly-box of tricks. Perhaps too bold. It would be a shame to drive home again without saying hello to a few wild brownies. Time will tell, but right now the self imposed pressure is on!

It's what some anglers would term a 'technical' little stream, - with complex braided currents, a low overhead tree canopy and highly contrasting lighting all adding to the challenge of presenting a fly and detecting takes. It's an easy river to read though, with obvious fish holding features in profusion. Creases, pools, slacks and undercuts all have trout potential and often the better fish occupy the best of these. The problem is all one of presentation, as often the best marks are separated from the angler by chaotic faster water. 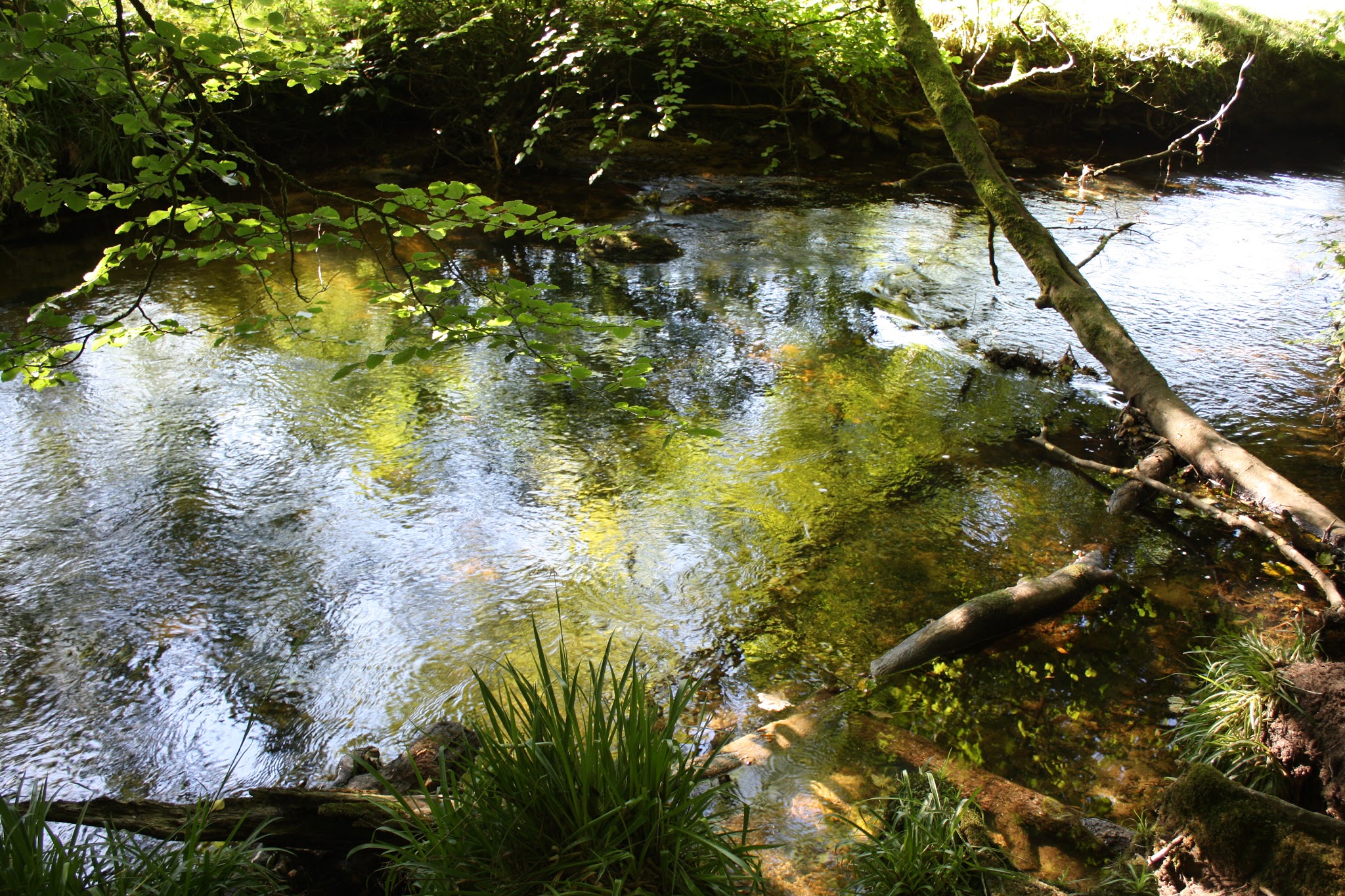 The tenkara approach is ideally suited to such flow mosaics, except that here a rod long enough to hold line clear of the water is often too long to use under the low branches. My rod of choice is just 8ft in length.

Even so possible fishing locations along the river are limited if a reasonable dead drift is desired. Down and across wet fly presentations with a low rod angle are more viable but invariably the fly skates across to end its swing in the riffles where the smallest trout parr seem to predominate. Relegated to the least favorable water these smallest of trout are hell bent on packing on weight and growing big enough to occupy the more profitable features and structure of the river. 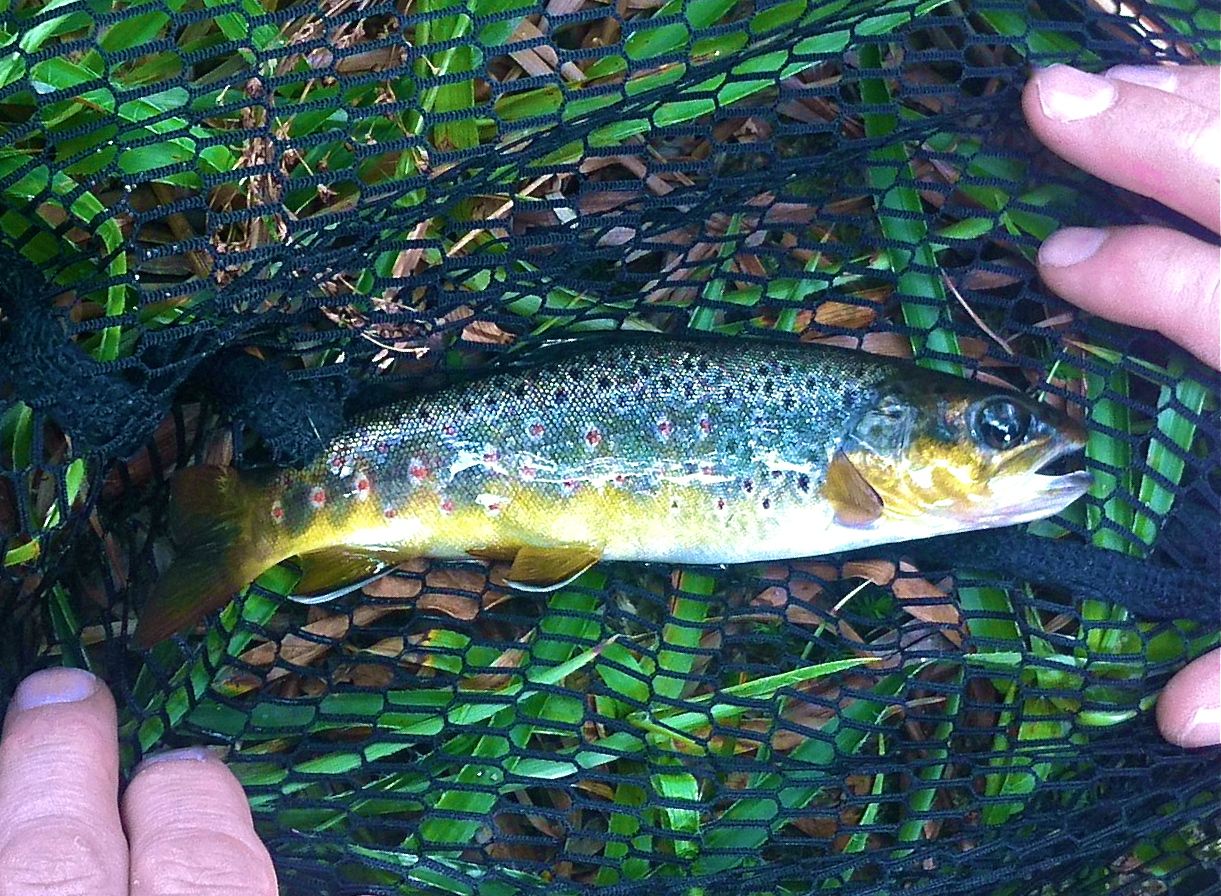 Given the choice I always prefer casting to sighted fish over 'prospecting' the water and so today is all about looking and watching. I soon see a splashy rise in a slack under the far bank. Some small pale flies are flitting around the bankside and the trout is keyed on to them. I angle a cast below the overhanging branches and my folk fly lands and is hit, the hanging line plucking taught for an instant then falling slack again. It's an encouraging start but I know this pool is blown now for a while.

Further along, a down and across wet fly elicits those inevitable knocks from tiny trout parr, until a better fish properly takes. It's an average size for this stream, a lovely buttery 6 incher, now I know that my folk fly pattern is working!

More walking and watching. The water is the colour of old malt whisky and the trout here have the most beautiful colouration - grading from burnt toffee on top through to butterscotch underneath, with a cosmic-camo of red, blue, black and silver along the flanks. In the water though these fish are shadows, take your eyes off them and they are gone when you look back. I cast my fly to such a shadow, the fly lands and the tail of the shadow flicks but the fly swings too soon out of the trout's window. Not spooked though, but interested  and 'on the fin'. A change of angle gives a longer drift next cast but the fly passes through a reflection and I lose sight of the fish as well. There is no indication of a take but for some reason I lift and the fish is on.

A good fish for this river and the proof of the pudding for my home-spun folk fly. And for me it's rare perfection. 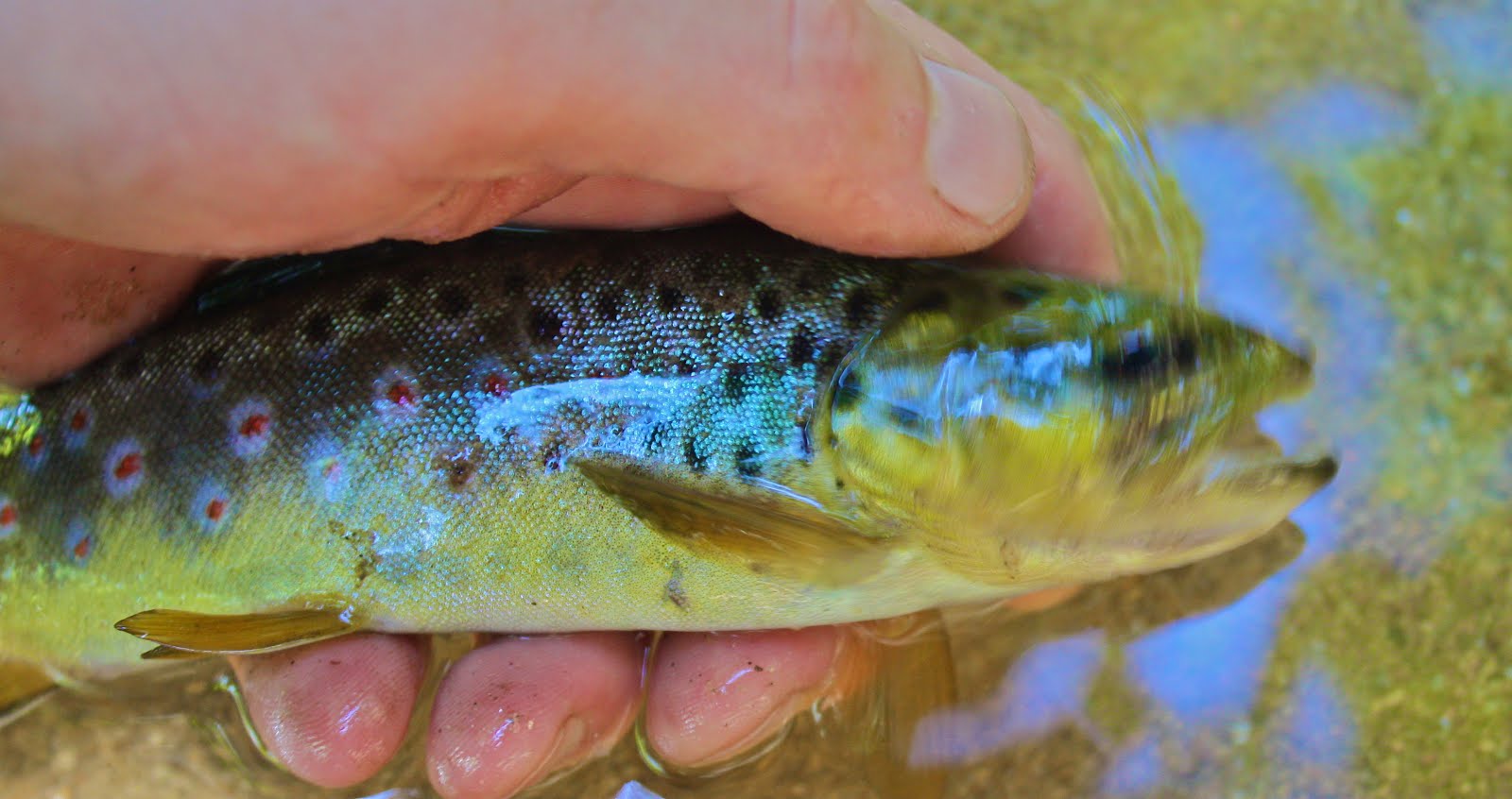 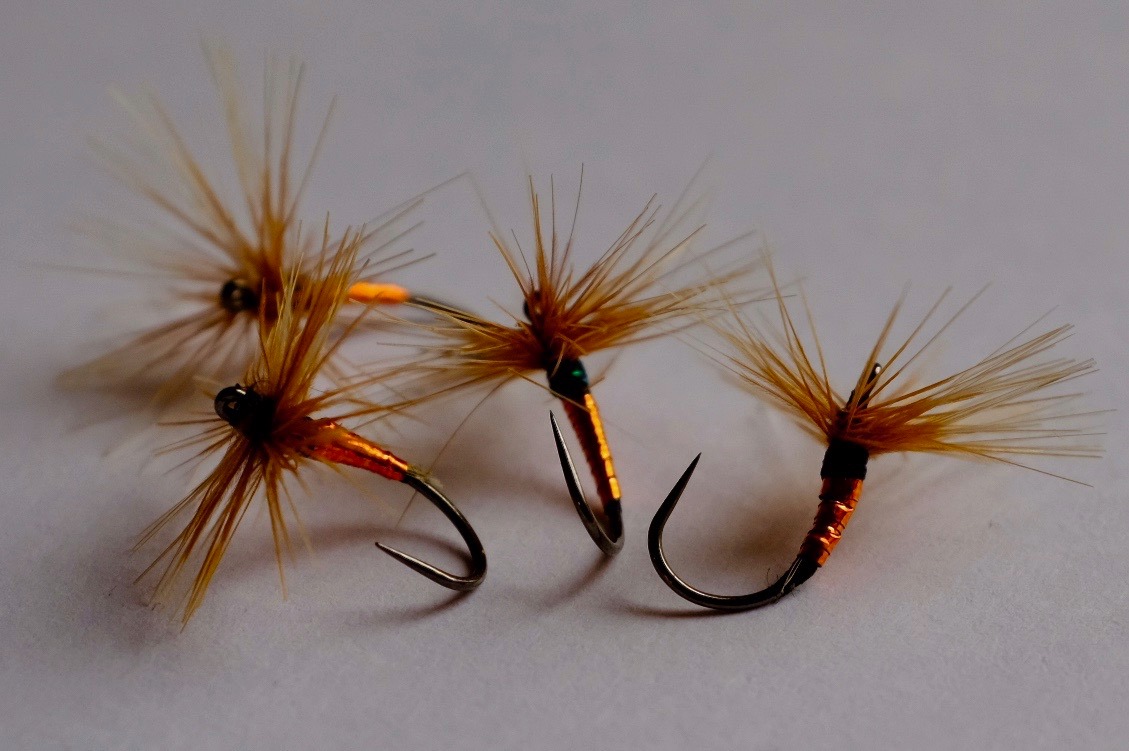 It was hard writing this post. As I strike the keys I can already hear tumble weed rolling forlornly past, and somewhere in the far distance the faint howling of wolves,  punctuated only by the occasional tolling of a bell, rung not by human hand but by the icy and metaphysical wind that now gusts beneath my door. However, some things just need to be said and I say the things that follow not as a naysayer or even as a fly tier, but as someone who just wants to catch fish, so here it is:    I don't believe fly fishers ever actually 'match the hatch.'  This concept  codified into a two hundred year old tradition of Victorian entomology-based fly fishing is merely a fly dresser's conceit, a harmless delusion that catches fish, but not for the reasons supposed. In fact as an approach it can actually work against the angler at times. There, I've said it and now there's no going back..  But wait! What's that scratching sound? Ahh.. i 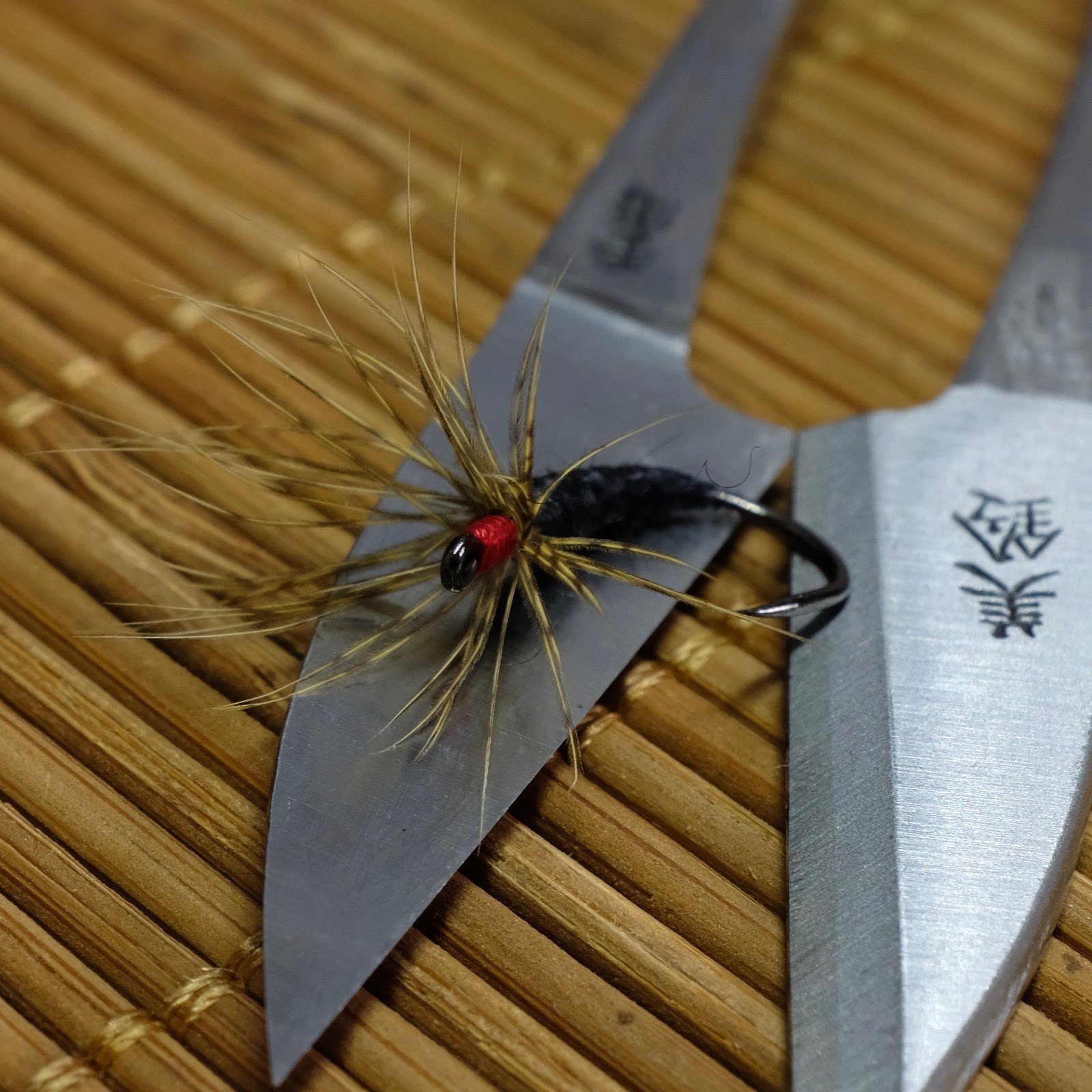 I'm tying a lot of flies right now. I know you don't need me to tell you why.   Perhaps it's because I'm tying a lot of flies that I'm thinking more about those little fly-bench incidentals that, while not essential, help to make life a little more enjoyable, and well.. elegant .    Take these scissors. I don't  need them to successfully finish a tie, it's just that I saw them and they spoke to me and I knew they would be right at home trimming the thread and hackles of my kebari. They are Japanese nigiri basami - incredibly precise and sharp tailor's scissors made from hand polished shirogami or 'white paper' steel.  Shirogami  is the closest  steel  to the famed traditional tamahagane  steel, used for the Samurai's katana swords . Like  tamahagane, s hirogami   steel  is very pure, with very little impurity like phosphorus or sulphur.  Shirogami  does not rust easily and holds an edge few can rival. My nigiri basami cut